Simnel Cake - Not Your Grandma's Fruitcake

Simnel Cake has long been a staple of Easter celebrations. An irresistible combination of rich fruitcake and lightly toasted marzipan, it's easy to understand its standing as a well-loved Easter classic.

Fruit cake may not be the most glamorous of the Easter treats, but you’d be a fool to overlook it. In truth it’s a deliciously devious cake with a curious history to match- the invention of Simnel Cake is a tale shrouded in mystery, leaving a crumb-trail of treason, dispute and betrayal.

This is not your Grandma’s Fruitcake.

So Who Invented Simnel Cake?

First to claim invention is Lambert Simnel, son of an Oxfordshire joiner and junior conspirator to overthrow the Tudor Monarchy. At 10 years old Simnel was presented by a cunning priest as the Son of recently overthrown King Richard III, in a plot to reclaim the throne from Henry VII. The scheme was uncovered and Simnel was sentenced to kitchen chores (we can only imagine the naughty step had not yet been invented). As kitchen boy, he allegedly created the cake. However, we all know children are the masters of tall tales, and you’d be foolish to believe someone brazen enough to pose as a prince.

A later claim lies in the 1867 Chambers Book of Days. This origin story claims Simnel Cake was born out of a marital dispute. Neatly named Simon and Nell experienced a break-in domestic bliss whilst bickering over how best to mark the end of lent, and unable to agree on either boiling or baking the remains of their Christmas pudding, they compromised by doing both.

Out of this conflict, the Simnel was born. I can only assume they were forced to compromise again on the name, calling it Sim-nel (Simon-Nell). To me it’s a little too nursery rhyme to be true. Either way, it seems the cake may have unfortunately been more successful than their marriage!

Where Does the Recipe Come From?

What we know for certain is that the Simnel cake has evolved through many local variations, with varying success. The Devizes Star Simnel took the form of a golden, fruit studded star, infused with saffron and brimming with lemon peel and currants. The Shrewsbury variation was a boiled cake with a crust so hard a recipient once believed it to be a footstool. Some recipes are definitely better left in the past!

The Simnel cake we know and love originated in Bury, Lancashire. A deliciously rich fruitcake, filled with juicy currants, topped with toasted marzipan and 11 marzipan balls, representing the better behaved of the apostles.

Immortalizing Judas’ betrayal with a marzipan snub seems even more cutting than Jesus’ tell-all best seller. In this case, revenge is a dish best served with a cup of tea.

Wherever it comes from, Simnel cake is well-deserving of a place at your Easter table. Be sure to make one to celebrate the season! Top yours with Magnolia Marzipan for a unique spring twist. 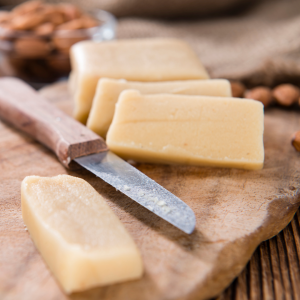 What a beautifully written piece of food delicious knowledge.

I am grateful for your expertise and look forward to making my own Simnel cake one day.

Foraging and Seasonality: A Path to Survival

By Josh Butt on 06/06/2022
With every passing day the way we live our lives is forever changing. The way we work, the way we travel and even our pastimes are unfathomable even 50 years ago. One thing that has never changed is the way we eat. While what we eat has certainly seen change over the years, recipes and […]
Read more

Incredible Edible Flowers: A Simple Guide to 11 Blooms You Can Gather and Grow

By Alicia Upton on 25/04/2022
Edible flowers are among the most beautiful thing you can place on your plate. Whether you’re decorating cakes or sprucing up salads, there's a bloom for every occasion. From the beautifully floral wisteria to the perfectly peppery nasturtium, there's a whole rainbow of petals to pick from.  You’re most likely already eating flowers without realising- […]
Read more

By Imogen Tinkler on 20/04/2022
Sit back as I take you through the history of time on the journey of Rhubarb as we undercover candlelit sheds and wartime treats.
Read more
Back to Top