The violet is small but mighty- bringing fear to farmwives, luck to the Irish and revolution to the French.  Who could imagine that such a small flower could have such a rich history!

Let’s begin with the Greek Goddess Persephone. Persephone was gathering violets for her mother Demeter (Goddess of the Earth) when Hades, entranced by her beauty kidnapped her and whisked her away to the underworld.

Demeter, plagued by grief, plunged the world into a dark, cold winter. Hermes was sent to negotiate Persephone's release and upon her return Demeter lifted the world into a bright, blossoming spring. This has ascribed meaning to the flowers- violets blooming has come to signify transitions and new beginnings.

Some 2000 miles away, farm wives in Devon developed a wariness of violets, as it was said that having violets in the home would curse your chickens, making them unable to lay. This news excuses any revolutionaries with chickens from participating in this week's seasonal recipe- we wouldn't want to be held responsible for a lack of eggs!

On the flipside, some consider dreaming of violets serendipitous- claiming it foreshadows marrying a young lover or approaching good fortune. Wearing a violet is also considered lucky in many circles- at Irish Horse races, hopefuls will often adorn their buttonholes with violets, hoping the charm will bring their pockets a blessing.

This luck, however, only applies outside of the home. On returning, you must place the posy outside the door, with a small bowl of milk. This is said to appease the fairies, protecting your home from the mischievous whims of fae-folk.

Another snippet of violet folklore claims that a bouquet of violets around the neck protects against dizziness. Having spent a night or two indulging in violet flavoured cocktails (reliably ending up a few steps south of sober) I’m sceptical about this particular claim. Admittedly, I was drinking, not wearing the blooms- perhaps the logical thing would be to test it again!

Napoleon favoured violets, and they became a symbol of him and his revolutionaries following his exile in 1814. Napoleon assured his wife that he would ‘return to see the violets bloom in spring’- this statement, alongside his love of the flower turned violets into a true icon of the revolution.

The humble blooms were worn by Napoleon’s soldiers, and replaced his likeness in prints and satire when his image was censored by the monarchy.

Revolutionaries would filter friend from foe with the simple question: do you like violets? If the response was ‘eh bien’, you were in the know, whereas a simple ‘oui’ or ‘non’ would reveal you to be an outsider.

Nowadays, you’ll find the violet lending it’s perfumed, floral sweetness to a range of sweets, drinks and perfumes. Few would think of the fairies as they bring their posies through the front door.

I’ll be spending my weekend testing the violet's claim to aid sobriety, and heartily invite you to do the same- for the sake of science of course. There are plenty of violet cocktails to tickle your tastebuds- try the Aviation, or spice up some prosecco with a dash of violet syrup. Try the recipe below, and be sure to show us know your findings!

If you’re looking for luck, or to distract a scourge of fairies from causing mischief, why not forage your own? The purple blooms emerge between the months of April and June, their purple heads peeking out to observe the joyous transition from cold, wet winters into- well - slightly warmer, wet springs.

I’ve had the most luck finding violets in woodlands and near water- along coastal paths and bordering streams. They just love moisture rich soils.

Their purple heads can be found peering out of verdant banks and creeping out from the cracks of moss covered walls. Keep your eyes at mid to low height when foraging, and don’t be afraid to head down an alley or two! For more helpful hints, take a look at my Violet Foraging Secrets to Success.

If you’ve enjoyed this snippet of foraging folklore, take a look at our pocket guide series: Foraging Fairytales. Together, we'll journey through the seasons with the magic of wild foods, uncovering botanical folklore, learn how to forage safely and sustainably and whip up mouthwatering foraged recipes. Start building your collection today!

Don't miss out sign up for our weekly newsletter - you won't know how you lived without it! 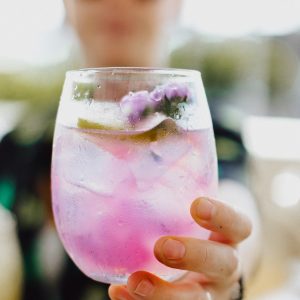 A delicious cocktail that perfectly captures the floral flavour of the Parma Violet, without overwhelming it with sweetness.
5 from 1 vote
Print Recipe Pin Recipe
Prep Time 5 mins
Course Drinks
Servings 1

I need to try this sounds so good!