“He saw fuchsia in a drizzling noon
The Elderflower at Dusk like a risen moon
And green fields greying on the windswept heights.”

Let me give you a sneak peak into the Eldertree folklore passed down to me by my Irish mother Mona and Great Uncle Harry and why I believed “He who sleeps under an elder will never wake”. Then quench your thirst with our Elderflower Iced Tea Recipe - one of over 20 recipes we share in our best selling Foraging Fairytales: Elderflower Festival Book.

In Ireland Elder is considered a sacred tree and just like the hawthorn it was forbidden to be cut down. I love the fact it grows in the most desolate of places from cracks in our urban cities, to crumbling buildings abandoned throughout the countryside to finding gaps in the hedgerow and taking hold. This amazing tree has been celebrated for generations for its culinary, medical and magical uses.

An old Irish staying states there are three signs of a cursed or abandoned place “ the elder the nettle and the corncrake”. An abbot in Iona created a law that women and children were not allowed to be killed in warfare and anyone who broke this law would face ruin and future generations cursed.

They would come back as elder, nettles or corncrake which is why if you look closely at the bark you can see its creases, rough like the skin of a person who has lived many lives. The Elder was universally held to be an unlucky malevolent tree and in Ireland was considered to be mischievous as most fairies are. It was seen as foolish to make a cradle out of elder as the children would sicken and the fairies would steal them.

It was also believed “He who sleeps under an elder will never wake” so I was always worried to nap under it as a child. It does have some loose basis in science - the living bark, leaves, roots, blossoms and berries possess a strong aromatic and oil based chemical, often referred to as a narcotic, which is powerful enough to deter exploring rabbits and livestock.

In fact much of the Eldertree is toxic. At Samhain the last of the elderberries are picked under magical rites. The wine made from these berries was considered the last sacred gift of the Earth Goddess. It was drunk ritually to invoke prophecy, divination and hallucination.

The Elder is considered to have a ‘crostail’ or bad temper of mischief and it was believed that someone who was struck with an Elder Branch - that after their death their hand would grow out of their grave. I would often look in the graveyards to see if there were any hands appearing as a small child having heard the story many times.

It was also said it was wrong to strike an animal or child with a piece of Eder as it would stop them growing from that day onwards. My Great Uncle Harry was struck by a drunk school teacher when he was a boy using an Elder branch. He burst Harry’s eardrum and Harry suffered with deafness from then on. I spent many hours listening to his stories as he moved in with my parents the year they got married in 1970.

He was also a small man. I used to believe he hadn’t grown because of this. I thought it was very unfair and that the drunk school master should have been punished. I always believed there was something very fairy-like about Uncle Harry and the he could have been friends with Moonface, Saucepan Man in Enid Blyton’s classic The Faraway Tree.

Read our fabulous book for more on the Elderflower Tree to find out why it is called the Hollow Tree, why I believed it looked over me at night while my Mama was at work and why the morning dew of the Elderflower is meant to be so powerful.

5.0 out of 5 stars Beautiful, thoughtful and lyrically written - Beanie.
"This beautiful book, has been written with love. The authors clearly are dedicated to foraging and are delightful in their narrative. The illustrations are divine, the photographs connect you to nature and the authors and the recipes are tantalisingly interesting. This would be a thoughtful gift for someone who enjoys nature, foraging, elderflower or cooking; or just treat yourself!"

Here is our Elderflower Iced Tea to wet your whistle. Try it and then hop over and join us on Instagram and find out more about you can start to or build upon how you use Elderflower. 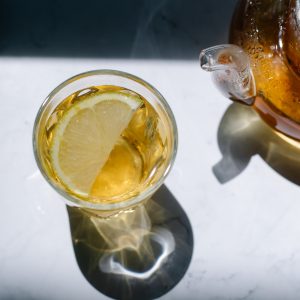 There is nothing like a long refreshing drink on a hot summer’s day. Especially after you have been out foraging Elderflower and creating Cordial! So make this quick and simple recipe to enjoy the fruits of your labour. Make this recipes your own while getting creative at the Kitchen Table. Try different flavour combinations with different teas! We tried this English Garden Tea from a local independent brand we love - Chai Wallah Margate. It has apple and mint notes and is so good! We have added some gin too as a Sundowner. Pure Bliss. If you don't have any Elderflower Cordial to hand here is a quick recipe to make 2 litres25 elderflower heads (approx)1kg of sugarZest (finely grated of 3 unwaxed lemons and their juice)I like to add the zest and juice of one orange too (you can do a test taste - with and without)1 teaspoon citric acid1.5 litres of waterHowRemove any insects from the Elderflowers and place the flower heads in a large bowl. Add in the lemon and orange zest too. .Bring 1.5 litres water to the boil and pour over the elderflowers and lemon and orange zest. Cover with a tea towel and leave overnight to infuse. Some people leave it even longer - you can experiment with batches leaving one for a day and one for three days to see and taste the difference. This is your cordial so make it to suit what you like best!Strain the liquid through a piece of muslin and pour into a saucepan. Add the sugar, the lemon and orange juice and the citric acidHeat on a low heat until the sugar is dissolved and then bring to a simmer and cook for a few minutesUse a funnel to pour the hot syrup into sterilised bottles. Seal the bottles with a screw top, a cork or a swing top lid. Then you can store it until you are ready to use it!
Print Recipe Pin Recipe
Total Time 7 mins
Course Drinks
Cuisine british
Servings 2 people