Are nettles the marmite of the foraging world? Since the beginning of time, we have had a love-hate relationship with these amazing plants.

Rubbing up against them with a bare leg definitely makes me share an expletive but when they are served up on the dinner table I am delighted.

They are nutritious, free, fabulously tasty and likely to be growing a five-minute walk away from you right now! So, let me take you on a journey through time, sharing some truly fascinating tales - ever heard of the courting ritual nettlemass?

Let me reveal why they are so fabulous for your garden and maybe just maybe I will persuade you to bring them into your kitchen.

Let’s start with the Romans in Britain.

Their soldiers used to beat themselves with nettles on their bare skin in an attempt to allay the pain of rheumatism brought on by cold damp weather and people have done this throughout history. I wonder if central heating brought an end to the need to do it?

My Mother was from Alcare, Sligo in the West of Ireland and her eyes would light up as she told me the old stories that had been passed down from generation to generation.

Including that I needed to eat three types of nettles in May to ward off sickness for the rest of the year. As a good Catholic, she of course loved the association of nettles with saints but the weirdest story has to be nettlemass.

Nettlemass is an old Irish custom associated with the 1st of May - the night before Nettlesmass. Samuel Carter Hall in “Ireland, its scenery and character” states on Nettlemass night boys walked around Cork stinging one another with nettles.”

It was also seen as a courting game and the aim was to sting the one who enamoured you the most. In some areas, nettles were even put into a prospective lover's bed!

I am not sure if Duncans and my courtship would have ended in marriage if he had done this to me. It is also said to have happened in Scotland, Devon and Cornwall.

Then there were the Saints and Nettles.

St. Bridget of Kidare was known for her hospitality and she was said to create a wonderful feast for visitors from empty cupboards by magically transforming nettles into tasty food. I love this idea and there is so much you can create with nettles that it blows my mind.

Nettles are being used more and more in our diet, in soups, replacing spinach, in fresh tea. I love nettles in a cake - they provide such colour that always makes my three-year-old Xanthȇ go oooh as we cut into it.

She believes they are Goblin cakes and Goblins are friends with the Incredible Hulk don’t you know. There is a reason we are seeing them more as people realise how nutritious they are. They are better than spinach for you and rich in Vitamin C, Vitamin K, carotene, potassium and calcium.

Though this doesn’t stop my Irish Uncle from phoning me to exclaim that they had seen nettles for sale in a London Farmers Market. People were paying £5 for nettles, £5! He had just weeded a load of them. He had me crying with laughter. I know what will be on our dinner table when he comes to visit.

Though he does support our decision to have a nettle patch in our garden!

This is because nettles are the key to survival for butterflies as they are the primary food source of caterpillars -  so many varieties from peacocks to tortoiseshells.  Without nettles, they would go after other food sources - which typically tends to be your favourite plant.

The other wonder of the garden - ladybirds - love them too. Ladybirds lay their eggs on nettles and the ladybird larvae are amazing; they eat garden pests like aphids, whitefly and red spider mites.

So I am not as mad as people think for having a nettle patch! Another reason is because I was always told not to eat nettles after May due to the Devil making them into shirts.

Yes, it sounds odd but as a child, I took this as fact and never really questioned it. This is because they get tougher as they mature.

So one way around this is to have your own Nettle patch in your garden so you can harvest them and keep getting new growth.

Nettles to me are a key part of foraging. They teach us so much. For Xanthȇ our three year old.

They have taught her why she should listen and wait to be told what is safe to touch and what isn’t. I always remember Dad, Duncan, my Stepmother and I going to a restaurant for a tasting menu in central London. They brought out a clay baked potato and told us not to touch it as it was hot! Duncan, Dad and I automatically touched it.

We are not natural rule followers and I had an inclination Xanthȇ might be the same. I would much rather she touched a nettle to learn to trust our judgement than touching fire to see if it really is as hot as we say it is.


Back to the benefits - In the 19th century, a nettle tonic was believed to promote hair growth. The most likely reason for this was a belief that whatever caused the growth of the tiny hairs on nettle leaves would do likewise for human scalps.

Not sure there is much scientific evidence for that. I can imagine Delboy and Rodney selling this at Peckham Market.  What do you think?

Fresh leaves have been used on arthritic joints as a counter-irritant. I remember my Great Uncle Harry doing this. I had no idea that it was because the arthritic pain could be relieved by causing another irritation so close to the joint and because they are believed to contain anti-inflammatory agents.

I was saddened to see little research had been conducted into this so I can’t say if there is even one grain of truth in it!

Across the world, nettle tips have been used for diuretic reasons to increase urine - especially for those with heart failure or high blood pressure. They have also been used to treat asthma, coughs, kidney problems and rheumatism like the Roman soldiers did.

Nettles have been used for so many different conditions and it has been passed down from generation to generation but very few have been tested in well-controlled trials.

There has been some research that has shown nettles to be diuretics and nettle root extract for Benign Prostatic Hyperplasia (BPH). Results so far have been encouraging and there are more on their way. I for one am fascinated by this and can’t wait to read more.

Nettles also are a sign of desolation and we see them across the UK where houses are overgrown and have been neglected. Though less and less as housing becomes so expensive.

Mama used to tell me nettles were a sign of the Irish Famine as you would see countless old farmsteads that had been deserted during the Irish Famine of 1984 - 52 and in the 1950s when lots more left the West in particular as agriculture declined and there was no future.

Over 10 million Irish left in a 100 year period. Which is huge seeing as the population was 3 million. You can still see my family's old homestead in the field next to mine in Aclare.

It really does bring up such emotion and I feel this when I see nettles. It is amazing how something can transport you somewhere.

Do you remember Sunny D in the 90s? There were lots of teenagers and young children going orange across the UK as they became addicted to the taste.

Nettles were used as a source of food in the Irish famine and people's skin could become a little greenish from the chlorophyll in the leaves. Who knew Irish people did actually turn green.


Don’t worry you don’t need to eat enough to turn you green to get the benefits. Here are some really easy ways to get them into the kitchen.

1. Replace anything you use Spinach in with nettles - a free and delicious food source.

2. Nettle Tea - add a few tips into boiling water and remove when the water goes slightly green to avoid bitterness.

3. Replace basil in pesto and make your own nettle pesto.

4. Join our community in the Kitchen Table Revolution! You'll gain access to our top-secret nettle recipes: from Simple Nettle Beer to our Nettle and Gorse Jelly. Click here to discover our Membership options.

Enjoyed this read our Foraging Fairytales on the Legendary Birch Tree by our co-founder Duncan or the Small but Mighty Violet by Alica. 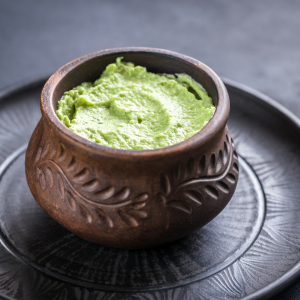